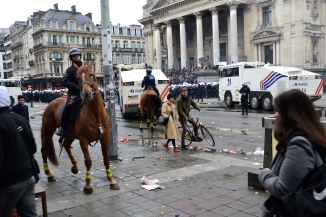 ©Barry Sandland/TIMB – And amidst all the violence, a calm, steady, walk

3/3: Amidst the confusion, police cordons and post-violence tension, I like this image. A woman and her biking friend making their way through the debris, through the police, to the other side. The police had cordoned off END_OF_DOCUMENT_TOKEN_TO_BE_REPLACED 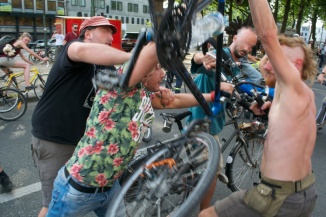 ©Barry Sandland/TIMB – Frustrated at the delay caused by the bicycle parade, this driver opted for physical attack.

I struggled with when to post this image. After all, the Gigantische Fiets Parade (Gibantic Bicycle Parade) was a celebration of cycling and, for the week following the event, I have promoted pro-cycling images. Over 2,000 cyclists out to celebrate and encourage cycling. An event held on a national holiday, well controlled by organisers – and yet the impatience of some drivers to cyclists brought about both verbal abuse and physical attack.  END_OF_DOCUMENT_TOKEN_TO_BE_REPLACED