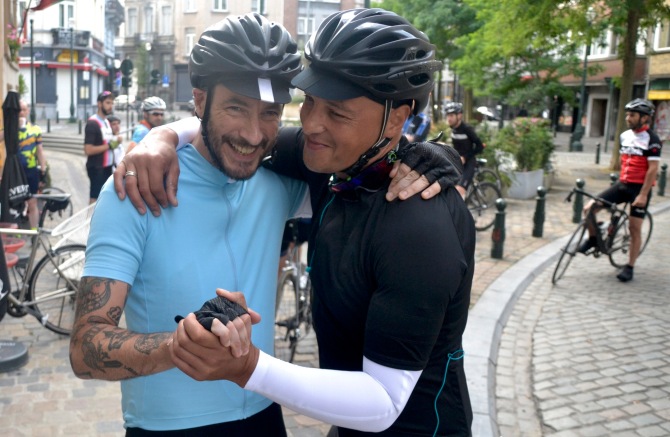 ©Barry Sandland/TIMB – Cycling friends can be the easiest.

“We have known each other for about four years. We used to ride together in another club. I lived in Antwerp and I used to make the train trip down every week to do the ride. Antwerp has no hills, so I came to Brussels to ride here. There are hills here.”

Notes: This is one of the better parts of cycling in a club. The friendships. Anybody on a bike becomes a friend. Cannot help it. At least, friends while riding – even on hills. There is a reason why Flanders tend to produce a lot of Belgium’s top cyclists. They have mean hills. The short, brutal variety. And then the Belgies make them harder by adding cobblestones. Then Belgium created the Spring Classics. Pave makes any hill a miserable experience. And if you train in misery, racing is easy. I learned how to ride hills in Newfoundland, Canada. In the entire region where I trained, there were three of four flat kilometres alongside the lake. Everything else was either uphill, or down. Your choice how you want to start – but you will climb, eventually, so get over it. And we had simple roads. Out and back. None of this circuit stuff. We would ride the coastal road, from village to village, out of the saddle, heaving out bodies to the top, knowing that any delight in racing down the other side be tempered by having to climb the hill on the way back. No short cuts. None of these soft, European routes that followed the contours of the valleys, bringing you gently from one cove to another. Newfoundland just paved a strip straight up the cliff face and left you to take care of yourself. Be hard or go home. In my life, pleasure always brings pain (now there is a Freud session I need to visit).
_______________________________________
facebook.com/thisismybike
_______________________________