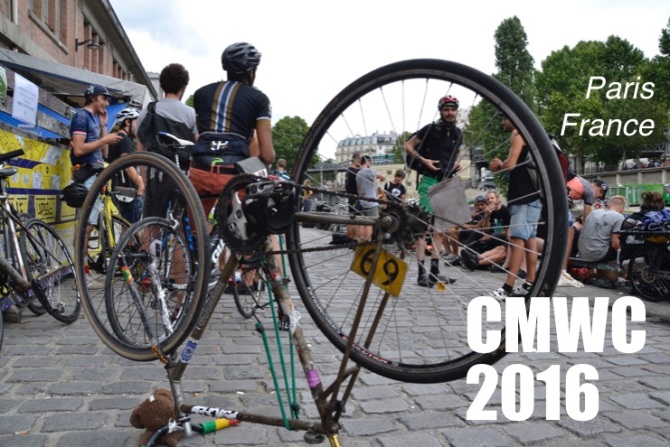 Part 02: Paris, the city of lights, would be host to the 2016 Cycle Messenger World Championships. The iconic buildings, the ethereal mystery of the city, would host these road scavengers. And when a few hundred cycle messengers gather, a city will have to embrace a wilder style of riding for a few days. 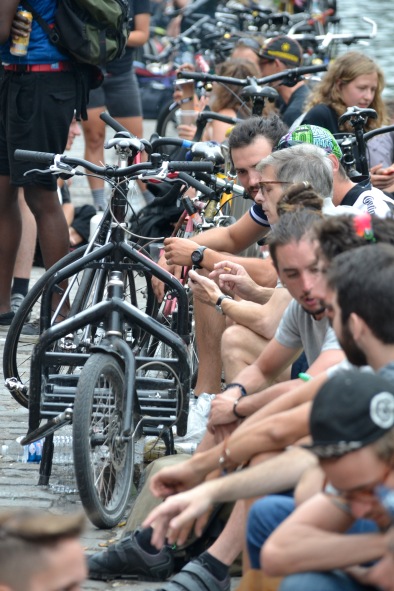 They came from North America, Mexico, Philippines, China, Japan, Australia and across Europe. Languages might differ and some communications stumbled, but there would always be the bikes, the chance to simply look appreciatively at their bike, offer a gesture of solidarity. There would be an overwhelming presence of fixies, brakeless and stripped of manufacturers logos and other miscellaneous.

I arrived the day before the event began. Off the Thalys, bike assembled on the station platform, messenger bag strapped snugly across my shoulders and I slipped onto the Paris streets and immediately felt the excitement of being close to the event, to the other riders who would be near, but unseen on the streets. I am a light traveller, but I have never travelled this light before and still felt I brought too much. Two pairs of shorts, some underwear, two t-shirts, two pairs of socks and two pairs of cycling shoes. The shoes were clearly more important that any other item. This wardrobe was my garment selection the week. The necessary toothbrush and paste were in a paper bag that I grabbed from the kitchen counter that morning as I ate the last crust of bread that used to be its contents. The messenger bag had rarely been this light.

It would not last. By the return, I had been tempted often by must-have t-shirts. I bought multiple garments in support of the London Courier Emergency Fund (LCEF). Then the two from the on-site silk screening cooperative. And I have this super-cool LCEF t-shirt of Eddy Merckx in his Molteni days, but now as a zombie cannibal. I will hold that back for either the September Day Without Cars here in Brussels, or to adorn my shoulders on Merckx’s birthday in 2017. T-shirts that spectacular require an unveiling.

Paris is a city I have visited a few times, as a pedestrian. Now with a bike, the freedom to explore was phenomenal. As I criss-crossed the city, there were small gatherings of messengers, immediately recognisable, as they rode the streets, stopping at the Eiffel Tower, alongside the Royal Park, easing onto the plaza of Notre Dame. In one day, these messengers would see more of Paris, the city design, the streets, arrondissements and public spaces, than most tourists would see in a week. When the pellmell rides of the alleycats are added, Paris would be seen from tip to tail. including some ventures into the city limits. 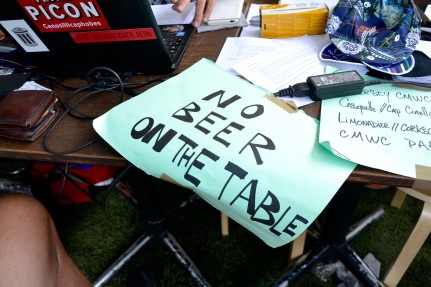 If you have been following cycling development in Paris, there has been these huge claims of how the city has improved for cycling. Bike paths are across the city, many of them physically separated from the roads. But it really is not that good. Time and time and time and time again, I would come across a truck or car that had parked directly in front of the entry or exit of the bike lane, making it painfully difficult to access. And, when I have been on the road, there is no shortage of drivers who honk and indicate I should, be in the bike lane regardless.

But Paris, as in every city, allows cyclists to be in any lane. And messengers hate being confined to bike lanes if it means the ability to move is going to be restricted unnecessarily. One of my new-found friends and I were riding together after being dropped in the first night alleycat race. We were coming back into the city, no bike lane visible, riding through the columns of near stationary cars when we had one driver who went berserk at our presence. He ended up chasing us three or four kilometres, shouting at us whenever he had a chance. And he released a pillar of bile when we stopped at a traffic island for a few minutes and he eventually caught up… Cars in a  city during the work day are never faster than a bicycle messenger for anything more than a few dozen metres. And then they are distant memories. Far distant.

Or the police who shouted at us to use the bike lane – but seemed oblivious to the truck blocking the entrance. We rode on, clearly deaf to the instructions and instantly cretinous, monolingual Anglo-Saxons. Paris is a great city to ride a bike, but they are a far cry from being truly bike friendly. They are creating zones for cyclists and expect their two-wheeled inhabitants to remain confined to those exclusion spaces and leave the roads to the motors. It is all so predictable.

But no matter to this level of bicycle couriers. They, to a rider, are well aware that bicycles are not limited to only bike paths. And the fastest path, far faster than cars, is in the mix of vehicles. Messengers are adamant that they are allowed on the roads, and are more than capable of maintaining the same speed as the cares that press close to them. And they can use a gap in traffic like some kind of space warp and flex body, bike and bag through. It might be a shock for the drivers, but by the time they realise what happened, the messenger is usually three car lengths ahead.

But, before  the alleycats, the track races, the qualifiers or the main race was the gathering. The first official night where everybody would meet anybody. Courier squads arrived dressed in their company colours and quickly blended into a single mass. Tattoos and beer became the common ground. And some of the most wonderful bikes were leaning against the walls, propped against the water’s edge or strewn on the cobblestones, lying like a faithful dog waiting for their master before heading home.

Messengers are impoverished, if their income from riding alone is considered. They might have enough for the event, but most have done the championships on a shoestring. They are camping, sleeping somewhat rough. If wealthy, they are sleeping in hostel beds, five or six to a room. The incredibly wealthy have budget hotel rooms. But they are few and far between.

One group from Bristol opted to ride across to the event. They managed to afford the ferry over and then rode their fixed wheel bikes the rests of the journey. Once there, money was tighter. One rider broke his frame on the Paris cobblestones and was lucky enough to be sent, by the event organisers, to an atelier where repairs could be done. Payment was little more than a spare beer and a grateful handshake.

Couriers have a dress code. They like to think they are free and clear of it all, but they are as guilty of looking like a clan as the next. Like the baggy shorts, t-shirts with some cycling message, cycling hat ands helmet that has been painted, sprayed, decorated with stickers. And the bikes… There are some gorgeous machines, to be sure. But there are far more decrepit, rough hewn, seen-better-days steeds that have been resurrected for the messenger life. The closer to true messenger, then the surer it is there will be a fixed gear involved.

And these messengers are key to a revival of bikes that were on the verge of being discarded. There are eighties racing frames, no longer good enough for a peloton, but more than solid enough to be a fast work horse. These steel frames with lug work of a bygone era have usually been transformed into fixies, and are raced about city streets, closer to their original purpose than they have seen in years.

Vintage is the messenger bike staple. There is some logic to that. Afterall, they are going to be tossed against polls, fences, walls and concrete as the messenger jumps on and off for pick-ups and drop-offs. Anybody precious about their paintwork might struggle with the casual disregard. And then there is theft. As good as the Reynolds 531 tubing might bevel, it is far less valuable to as thief. If you are going to lose the bike, at least you have a better chance of affording the near-exact replacement. Vintage is affordable. Theft, unfortunately, seems inevitable.

There is a proviso to this. I have a vintage bike. My Cyclops. It is not 40 years old and it has been with me from the beginning. By now, it should have been retired, cleaned and hung in my living room in a place of pride as the piece of art art is. Instead, I am riding it often when on shift. If I were to lose her, I would be sad for weeks. I think I would rather lose my expensive road bike, complete with Shimano 105 groupset. It would hurt less. And I would not have to torture myself of thinking about my Cyclops being treated like an animal by someone who could carte less about it.

So, when the messengers gathered for the first night, I was in heaven staring at a mass of cycling heritage.