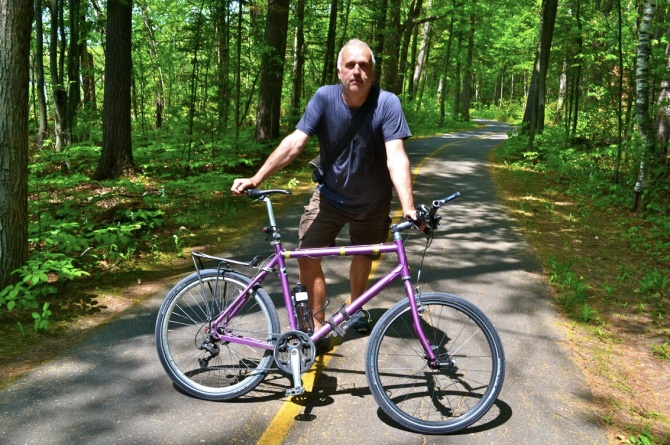 “This is my daily bike, slightly adjusted for touring. The slow stuff. The tires are super-endurance versions that do me well, but makes the bike a bit slower. But I love the high seat and low handlebars. I brought this set up design over from the road bikes so I would have a faster, more competitive ride, even when touring. In my mind, I might be setting the bike up for a tour, but it can be a fast tour. I suppose it is the speed mindset instilled from bygone racing days.”

Photographer’s notes: OK, this is me. The photo was taken by a friend of mine when I was on vacation. Vacations are too short.

Touring is something I have slipped into over the years. But I tend to do it in extremes. I had never been on a multi-day tour before I went from Kenya to South Africa on two wheels a few decades ago.

I did the trip with a friend and it was all a bit faster. High pedal cadence had us riding at about 90rpm when touring books were recommending 60. I cannot imagine the sloth-like stroke that would be so slow. No response effect, no agility. Higher cadence gives you far more efficiency, whether touring or racing.

Africa is a great place to tour. We had no tent, no sleeping bags. Just a tarp and a duvet cover each. Keep the bike light and lighter.

Apart from the multiple episodes of malaria – each region has its own type, it seems –  the five day ride without any stores to find food, and the hostel that had a slab of blue meat ageing on the bathroom door, the trip was easy.